The store will not work correctly in the case when cookies are disabled.
Menu
Account
Quick Links

Follistatin-like protein 1 (FSTL1) is a widely-expressed, extracellular glycoprotein that is homologously grouped into the osteonectin (BM-40/SPARC) family of secreted proteins based on its possession of both a follistatin-like and extracellular calcium-binding domain. Initially identified as a TGF-β-inducible protein in a cloned mouse osteoblast cell line, FSTL1 has since been implicated in an array of cell-type-specific functions, such as the regulation of proliferation, differentiation, apoptosis and migration, as well as a number of biological processes, including embryonic development, inflammatory response, angiogenesis, tumorigenesis, and immune disease pathogenesis. Highly conserved across mammalian species and widely expressed in human tissues, FSTL1 can be upregulated through signaling mediators of the innate immune system,such as TLR4 agonists and the arthritogenic cytokine IL-1β via NFκB pathways, to stimulate the expression and secretion of pro-inflammatory cytokines, including TNF-α, IL-1β, IL-6 and IL-8. While cells of mesenchymal lineage are capable of FSTL1 production, FSTL1 expression is notably absent from cells of hematopoietic lineage under normal physiological conditions. Macrophages and monocytes are, however, capable of taking up FSTL1 at sites of inflammation where FSTL1 stimulation can cause the expression of caspase-1 and its resultant enzymatic cleavage of active IL-1β from pro-IL-1β. Whereas the overexpression of FSTL1 has been noted as a substantial contributor to the progression of immune diseases like rheumatoid arthritis (RA) and osteoarthritis (OA), diminished FSTL1 serum levels have been identified as playing a significant part in both ovarian and endometrial carcinogenesis, where it directly affects cell proliferation, migration and invasion.

The BioGems Human FSTL1 Pre-Coated ELISA (Enzyme-Linked Immunosorbent Assay) kit is a solid phase immunoassay specially designed to measure FSTL1 with a 96-well strip plate that is pre-coated with mouse monoclonal antibody specific for FSTL1. It contains NS0-expressed recombinant FSTL1. The detection antibody is a biotinylated goat polyclonal antibody specific for FSTL1. The kit is analytically validated with ready to use reagents. 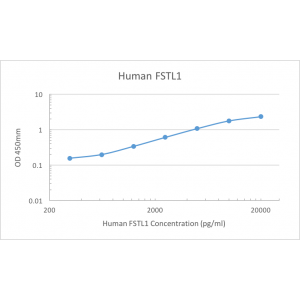